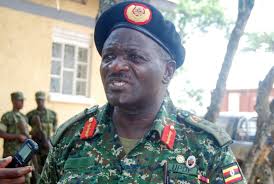 The army boss, Gen Katumba Wamala urged local leaders to stop worrying about an impending coup but focus on averting the recruitment of children by the Allied Democratic Forces (ADF) from Mayuge District

He said the district is the main recruitment base for the rebel outfit that is operating in the Democratic Republic of Congo (DRC) and children aged between nine and 13 into their ranks promising to create an Islamic state to end the persecution of Muslims.

‘A total of 23 children from the district were in 2014 rescued from DRC by the army and children of similar age have not been lucky to be rescued. ‘He said

He added that some of the parents whose children went missing ask for their whereabouts. They are in DR Congo and some of them have died,” he said.