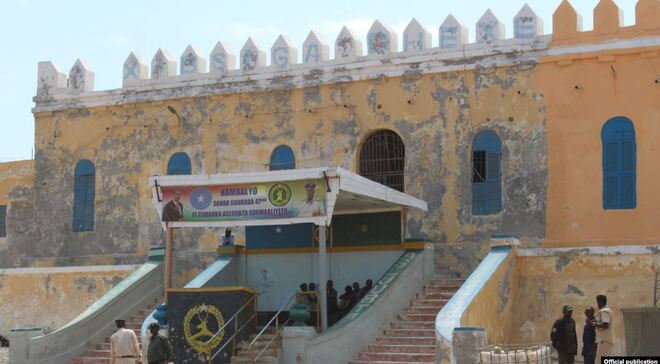 
The inmates, all members of Islamist militant group al-Shabab, had obtained three pistols and six hand grenades smuggled into the prison, a senior security official said.
The inmates attacked guards, sparking the confrontation.
Two other inmates suspected of involvement were wounded and apprehended, according to officials. One inmate is believed to have escaped the facility.Residents said that huge explosions preceded the gunfire at the heavily guarded Mogadishu prison.
It has not been established how al-Shabab inmates obtained the guns but grenade explosions and gunfire could be heard inside the prison


Officials said they believe the escapee killed the driver of a rickshaw and another civilian outside the prison.
The gunfire started in the section where inmates serving a life sentence are held, according to the official.
The security official said it is believed the weapons were hidden in food and other items smuggled into the prison when inmates receive visits twice a week.
An inmate held in a different part of the prison who was interviewed by a local radio said the shooting started during change of shift by the guards.
The central prison is located next to Mogadishu’s seaport and is heavily guarded. Dozens of al-Shabab inmates are held at the facility, including some who are on death row.- VOA reported.