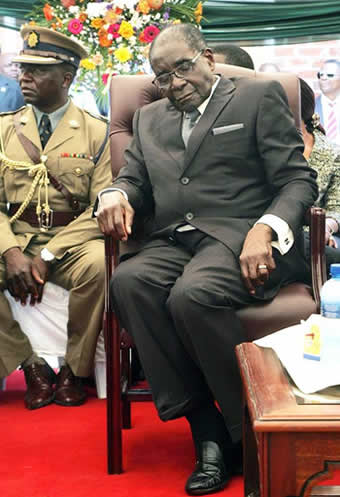 The world’s oldest national leader and Zimbabwean President Robert Mugabe has said his ruling ZANU-PF party and the people of Zimbabwe see no viable successor to him for next year’s general elections.

Mugabe has been in power since 1980 and in December his party confirmed him as its candidate for the next presidential election expected in mid-2018, when he will be 94.

“The call to step down must come from my party, my party at congress, my party at central committee,” Mugabe said in excerpts from a radio broadcast that will air this week and that were printed in the state-owned Sunday Mail newspaper.

“But then what do you see? It’s the opposite. They want me to stand for elections.”

“The majority of the people feel that there is no replacement, a successor who to them is acceptable, as acceptable as I am,” he added.

On Friday, his wife Grace Mugabe said the 92-year-old would be the voters’ choice even after he dies.

“One day when God decides that Mugabe dies, we will have his corpse appear as a candidate on the ballot paper,” Grace, seen as a possible successor to her ailing husband, told a party rally in Buhera, southeast of the capital Harare.

“You will see people voting for Mugabe as a corpse. I am seriously telling you, just to show people how people love their president.”

Grace, who was appointed leader of ZANU-PF’s women’s wing in a surprise move two years ago, is well known for her fiery speeches and verbal attacks on her husband’s opponents. Grace has previously pledged to push Mugabe in his wheelchair to election rallies if needed.