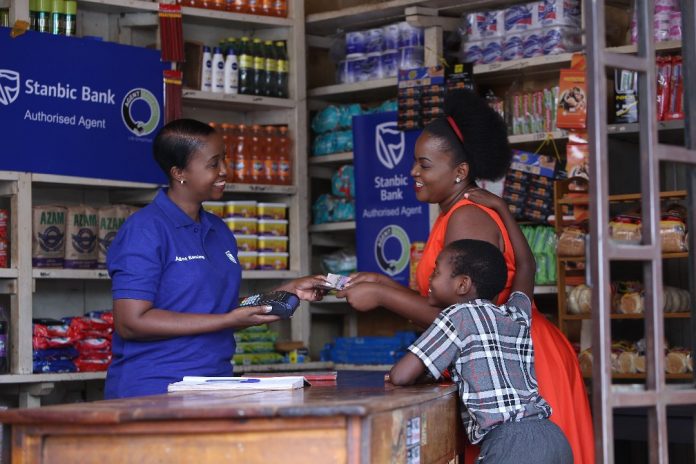 A year later, Agency Banking is growing very fast with returned a market share of more than 20 per cent in the financial industry, according to the statistics from Agent Banking Company of Uganda.


The sector is on the rise as mobile money grows at decreasing rate. This is according to the Bank of Uganda annual report for the financial year 2019 ended June 2019
The report noted that during the six months period ended June 30th 2019, the value of transactions processed by active agency bank agents amounted Ugx. 5.74 trillion. Early this year, Stanbic Bank CEO Patrick Mweheire revealed that more than twenty percent of Stanbic Bank’s transactions were now going through agencies spread all over the country.

It is a low-cost model that is expected to deepen financial inclusion by providing a bridge between banks and customers
A bank agent could be a petrol station, supermarket, a permanent mobile money agent, a pharmacy, a retail shop, hardware store that is fully licensed and has been in existence for a year.


By June 2019, 14 commercial banks were licensed and 13 were actively participating in Agency banking. The total number of agents licensed stood at 8,104 as at June 2019.
Agency banking was established after the enactment of The Financial Institutions (Agent Banking) Regulation, 2017, on July 14, 2017.
Meanwhile, the same report reveals that mobile money transfer services, grew in volume but declined in value during the year to June 2019.


The Agency Banking model was one of the innovations with the 2016 amendment of the Financial Institutions Act 2004. Bank of Uganda in 2017 issued the Financial Institutions (Agent Banking) Regulations which introduced agent banking as a new delivery channel for offering banking services.
Studies had estimated that over nine million adults in Uganda needed to travel more than an hour to access a bank branch. With Agency Banking, the gap is likely to reduce further to enable thousands of low-level income households access to financial services.


Unlike the traditional banking hall where a teller is only available within the strict banking hours, agents – mostly the outlet owners – normally offer flexible time schedules