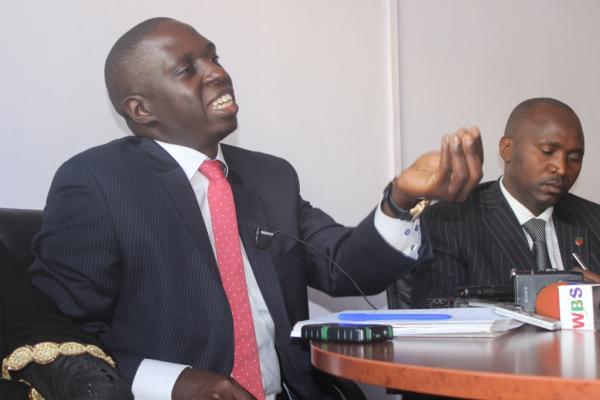 Monday, the country was shocked to learn that the bill that seeks to among others change Article 102 of the constitution — which caps the presidential age limit at 75 — had been gazetted and awaited to be tabled in parliament.
Specifically, Article 102 (b) states that a person is not qualified for election as president of Uganda if he or she is “less than thirty-five years and or more than seventy-five years of age.”
Museveni, who turns 73 later this year, will be 76 by 2021 and thus ineligible to stand for president under the constitution as it is today


Maj Gen Kahinda Otafiire, the minister of Justice and Constitutional Affairs, told the Observer that the Constitution (Amendment) Bill 2017 now awaits to be published in The Uganda Gazette before it can come to parliament for debate.
On Wednesday, Kampala Central Member of Parliament Muhammad Nsereko, launched a campaign that seeks to block this bill.
The outspoken Kampala Central MP says he needs 180 Members of Parliament to say NO CHANGE to the amendment in order to rewrite the history of our motherland.
‘ ‘My plans shall be laid to derail our cause, but no amount of force shall overcome the power of an organised and committed group of people. This struggle shall not be easy I know it’s got thorns, vales , creepers and detractors but come what may we shall overcome to rebuild our mother land.’’ Nsereko noted in the statement.

The MP also attacked President Museveni who he says, there is not much he can do, that he has failed to do in last 30 years he has been in power.
‘ ‘Ugandans have let you serve for 30 years plus, the question is, what is it that you have not done in the last 30 years that you want to do now?’’
Nsereko says, Uganda just like Zimbabwe has become a nation of embarrassment.
‘’Look back at the values you fought for and realise that this is your last chance to leave power as a stateman.’’ Nsereko suggested to president Museveni


Nsereko called on the president not to be ‘ ‘carried away by chants of sychophants and greedy political actors whose future they can’t see without you in the seat.’’
The outspoken MP reminded the president of the slogan he used in 2011 presidential campaign; ‘‘ No Change’’
‘ ‘ From today onwards the slogan of NO CHANGE that you cherished a lot will be the bad music in your ears. There is still enough time Mr. president for you to change your decision and be a stateman.’’ Nsereko noted in the statement.
The controversial MP says that for the rest of Ugandans who support the blocking of the constitutional amendment, ‘‘our new slogan is, “No Change.”


He revealed that effective, Monday next week, his team shall roll out our roadmap as he seeks to successfully block the change in age limit.
In a 2012 interview that is now commonly shared on social media, President Museveni told NTV: “I don’t think someone can be an effective leader after 75 years.”


In the last paragraph of Sowing the Mustard Seed (1997 edition), president Museveni writes:
“… There are now people of presidential calibre and capacity who can take over when I retire, and I shall be among the first to back them” (p.215).