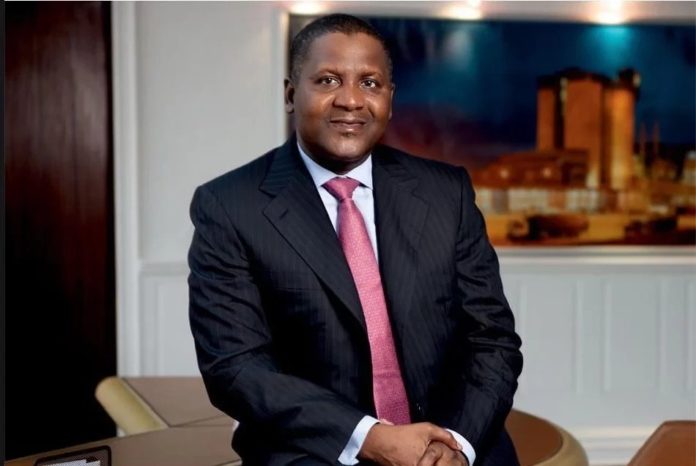 Although, Africa’s richest man, Nigerian Aliko Dangote dropped to 105th on the 2017 Forbe’s real-time billionaires’ ranking, he maintains the lead in Africa, as the richest man.
Dangote, who was ranked 51st in 2016 with a net worth of $15.4 billion, currently has a net worth of $12.2 billion, africannews.com reports.


The businessman was ranked 37th richest man in the world in 2014 with a net worth of $25 billion.
The decline is attributed to the devaluation of Naira, the Nigerian currency.
There are 21 African billionaires living in Africa worth a combined $70 billion.
The next African on the is South African diamond magnate Nicky Oppenheimer who ranks 199th with $7 billion, followed by another South African, luxury goods tycoon Johann Rupert who ranks 237th with $6.1 billion.

Nigerian telecom tycoon Mike Adenuga ranked 250th with a net worth of $5.8 billion, followed by Egypt’s richest billionaire Nassef Sawiris ranked 269th and worth $5.6 billion.
Retail magnate South African Christoffel Wiese ranked 269th with a worth of $5.6 billion.
South Africa retains its dominance on the Africa list and is tied with Egypt for the largest number of individual billionaires.


Only two female billionaires in Africa made it on the list including daughter of Angola’s president Isabel dos Santos – who is Africa’s richest woman – and Nigeria’s Folorunsho Alakija, vice chair of Nigerian oil exploration company, Famfa Oil.
Tanzanian Mohammed Dewji is Africa’s youngest billionaire at age 41. He is CEO of conglomerate METL, which his father founded in the 1970s.


Onsi Sawiris of Egypt is the continent’s oldest billionaire at age 86 and the father of two other African billionaires — Nassef and Naguib Sawiris.
Thirteen out of Africa’s 21 billionaires have self-made fortunes, while the other eight inherited their fortunes.
They hail from 7 countries: South Africa, Egypt, Nigeria, Morocco, Algeria, Angola, and Tanzania.
Source: Vanguard

COVID-19 Presents new way of doing things- there are also many...