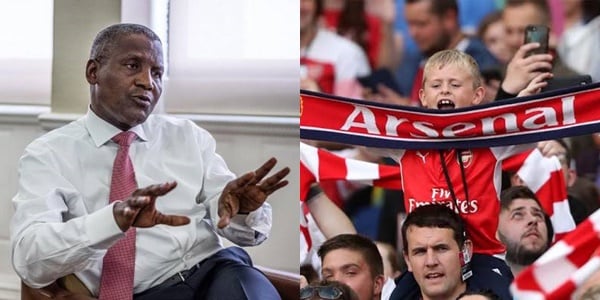 
The richest man in Africa has expressed a desire to take over at Emirates Stadium. Nigerian businessman Aliko Dangote has hinted he could buy Arsenal in 2021 if a number of multi-billion dollar projects for his company are completed on time.


The 62-year-old founded the Dangote Group – the largest conglomerate in West Africa – in 1981, which deals with the manufacturing and production of a number of consumer goods including sugar, cement, rice, flour and fisheries.


Dangote has a net worth of more than £8.5 billion ($11 billion) and has been heavily linked with a takeover at Arsenal in the past, with the club currently owned by Kroenke Sports & Entertainment.
The Nigeria businessman has made no secret of his desire to take over the north London club in the past and has made several statements about launching a future takeover bid in the past.

He said in 2018 that he would likely bid to buy the London club in 2020. But he is currently working towards the completion of his refinery in Lagos.
“It is a team that, yes, I would like to buy someday, but what I keep saying is we have $20 billion (£15 billion) worth of projects and that’s what I really want to concentrate on,” Dangote told the David Rubenstein Show.

Arsenal’s current hierarchy have come under fire in recent months from large sections of the fan base over the way they are running the club.

Last summer, a number of supporters started the ‘We Care Do You’ campaign, in protest against the owners.

However, KSE responded by insisting they were committed to turning things around to guide the club back into Premier League contention.


Stan Kroenke currently owns Arsenal and is the majority shareholder at Emirates Stadium.