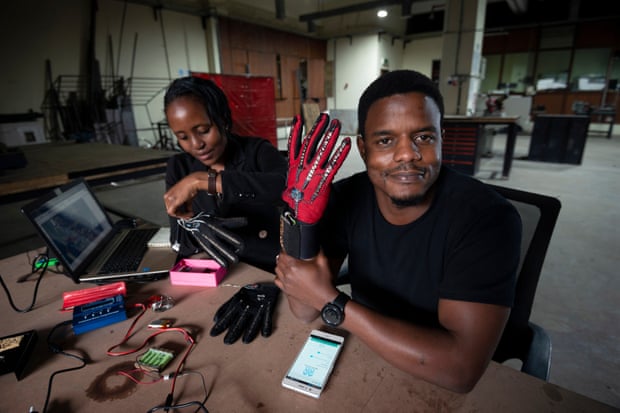 Roy Allela’s six-year-old niece was born deaf and found it extremely difficult to communicate with her family, none of whom knew sign language.
The need to communicate and connect with her niece pushed 25-year-old Roy to invent smart gloves that convert sign language movements into audio speech.


The sign language to speech translation glove – named Sign-IO recognizes various letters signed by sign language users and transmits this data to an Android application where it is vocalized.
The gloves have flex sensors stitched on to each finger. The sensors quantify the bend of the fingers and process the letter being signed. The gloves are paired via Bluetooth to a mobile phone application that Allela also developed, which then vocalises the letter.
My niece wears the gloves, pairs them to her phone or mine, then starts signing and I’m able to understand what she’s saying,” says Allela. “Like all sign language users, she’s very good at lip reading, so she doesn’t need me to sign back.”

Users can also set the language, gender and pitch of the vocalisation through the app, with accuracy results averaging 93%, says Allela. Perhaps most importantly, the gloves can be packaged in any style the user wants, whether that’s a princess glove or a Spider-Man one, he says.
“It fights the stigma associated with being deaf and having a speech impediment. If the gloves look cool, every kid will want to know why you have them on.”


The gloves placed second runners-up at the Royal Academy of Engineering Leaders in Innovation Fellowship in London and won the hardware trailblazer award from the American Society of Mechanical Engineers.