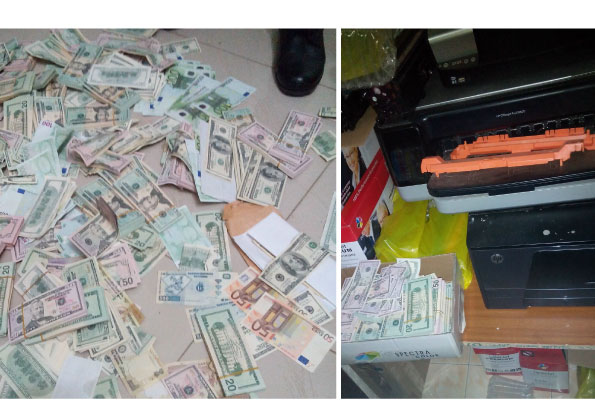 
The task team seized fake Ugandan Shillings, black dollars bills totaling $10.500, USD 200, 16 bundles of black US Paper Dollars and chemicals among several exhibits.
Four Cameroonian Nationals and 3 Ugandans were arrested during the operation.
During the month January, the task team arrested, the 4 Cameroonian Nationals while planning to carry out an illegal business dealing in minerals from Cham Towers.

A further search was immediately conducted at their premises in Lukuli-Kibalama LCI, Makindye Division. Several exhibits were recovered, which included; 560 counterfeit notes in the denomination of 50,000 thus a face value of Ugx 28m, 105 counterfeit US dollar bills of $100 totalling USD 10,500, 7 bottles of Chemicals (6 small bottles of 60mg and 1 white bottle of 100mg).


The suspects included; Lyonga Kunvasky Elongo, a Cameroonian National who possessed a DRC passport number 0B0887497, expiring on the 17/10/2020.
He also had an expired Cameroonian Passport, indicating his previous travels to Nigeria, Mexico, Tanzania, Burindi and Austria; Collins Ashu Ambe who claims to have lost his Cameroonian Passport and acquired a DRC Laissez passer Number 173/19 in the names of Jean Paul Mazembe.
He used it to enter Uganda on the 14/10/2019 and was granted 2 months stay, which expired, and was illegally staying in the country.


A third operation was conducted in Nsambya, where one Behangana Geoffrey alias Kagame, a 35 year old male was arrested.
Several exhibits were recovered which included; 36 counterfeit shilling notes of 5000, three fake black shilling notes in the denomination of 10.000, 20,000 and 50,000, two bottles of Chemicals used to make the fake notes. The suspect it is alleged works for a rich businessman in Ndeeba who imports the fake currency notes from a foreign country.


An accomplice identified as Masagazi Tom, a 33 year old, bodaboda rider of Mini price and resident of Mprererwe, Kawempe Division, who transported Aminah while distributing the counterfeit notes was also arrested. They revealed Daniel Ssenyonjo of Mukono, Lweza, as their source of counterfeit.
The investigation followed surveillance operations conducted over a period of 2 months. It has so far been established that the suspects used the chemicals and black counterfeit notes (shillings and dollars) to defraud victims, after cleaning the dark substance on the selected genuine niotes . They would thereafter, charge them exorbitantly through third parties for the supply of the chemicals.