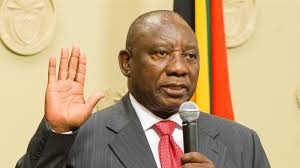 The World Bank raised its forecasts for the South African economy on Tuesday but warned that growth potential would remain weak without concerted efforts to reduce inequality and stimulate competition.


The World Bank now sees gross domestic product growing by 1.4 percent this year, up from its September forecast of 1.1 percent, supported by improved business and consumer confidence after Cyril Ramaphosa replaced Jacob Zuma as head of state in February.
But South Africa will struggle to raise growth much beyond 2 percent without policy interventions to improve skills among the poor and tackle monopolies, it said.

“There has been a smooth and seamless political transition, which is important. And there have been gains in the trust of people and businesses,” said Paul Noumba Um, World Bank country director for South Africa.
“That said, inequality, poverty and unemployment are big challenges. South Africa is the most unequal economy in the world today,” he told a news conference in Johannesburg.


The World Bank’s predictions are more pessimistic than those of the finance ministry, which is targeting growth of at least 1.5 percent in 2018, and ratings agencies such as S&P Global.
The World Bank forecast growth of 1.8 percent next year and 1.9 percent in 2020 but said that would be insufficient to meaningfully reduce poverty or dent the 27 percent unemployment rate.


Under Zuma’s watch, unemployment rose and the economy stagnated as businesses were reluctant to invest, and South Africa has consistently failed to achieve the government’s growth target of 5 percent.
Sebastien Dessus, the World Bank’s programme leader for South Africa, said reaching 5 percent growth was not realistic in the near term.


He highlighted better education, fighting corruption and restoring policy certainty in mining as factors which could boost the economy. World Bank country director Noumba Um said that if South Africa could achieve 3 percent growth, “that would be a significant achievement.”
////Reuters