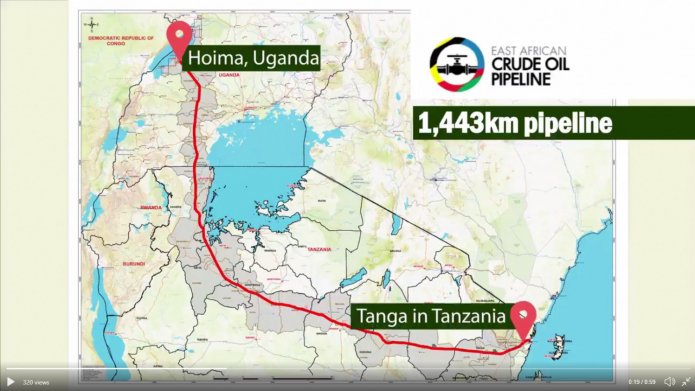 In response to the news that Uganda, Tanzania and oil firms Total and CNOOC have signed agreements to kickstart the construction of a Sh371.7 billion ($3.5 billion) 1,440 Kilometers long crude oil pipeline, Greenpeace Africa Senior Political Advisor, Fredrick Njehu has said:

“Oil companies are desperately clinging onto a dying industry. They clearly have vested interests in keeping their pockets lined. Communities in East Africa are not interested in dirty, outdated, fossil-fuels. They are rising up and championing a future that is powered by renewable sources of energy.
On Sunday, President Yoweri Museveni of Uganda and President Samia Suluhu Hassan of Tanzania signed three agreements paving the way for construction of the pipeline, expected to be completed in 2025.

“The crude oil pipeline will threaten water resources, biodiversity and Uganda’s oldest and largest nature reserve, the Murchison Falls National Park, which would be opened up to large-scale oil extraction at a time when the world is acting to urgently reduce its reliance on fossil fuels. The project will also have severe impacts on local communities rights.

“No matter how you look at it, oil is highly risky and has significant potential to damage the environment and put surrounding communities in peril. East Africa has some of the best renewable energy resources in the world, and these resources should be maximised as governments shift away from fossil fuels in a people-centred just transition.


“Contrary to what proponents argue, the EACOP will not “unlock East Africa’s potential”. East Africa needs energy security based on widespread rollout of renewables and the millions of clean jobs that come with it, and it needs to protect its natural heritage. African governments must prioritise innovative and just solutions for energy and not fall into neo-colonial projects that have vast environmental and climate risks.
According to the signed agreements signed, Total will hold the largest stake in the pipeline with 62 percent. The Uganda National Oil Company and Tanzania Petroleum Development Corporation will each hold 15 percent, and the China National Offshore Oil Corporation, or CNOOC, will own the other 8 percent

Chinese and French oil companies involved in the East African Crude Oil Pipeline project, to be built from Uganda to Tanzania, say affected villagers are being compensated. But rights groups representing hundreds of families who will be displaced by the project tell a different story.
human rights organizations say pipeline construction will displace up to 10,000 people, who are not being adequately compensated.
Sewanyana Livingstone, the head of the Foundation for Human Rights organization, says locals are not being heard.
“Of course, the population along the pipeline are interested in compensation. Because they were displaced; they were not heard; they are not party to the negotiation. We are trying in our follow-up activities to see how (French energy company) Total can bring them on board. But at the moment, they seem to be excluded,” Livingstone said.
Pierre Jessua, Total’s general manager, says the company has not voluntarily delayed the compensation to the affected families.


“It was, I would say, due to the stop-and-go of the project that we had to interrupt the process,” Jessua said. “But we never actually took the lands and deprive the people from the land. We have evaluated the land, evacuated the crops from the land, evaluated the buildings which were on the land.” The VOA reported
Chen Zhugobia, president of CNOOC’s Uganda branch, says very few people in their areas of jurisdiction are yet to be compensated.


“We have already compensated most of the people related to the land. And from my memory, only about 6 households are not compensated,” Zhugobia said.