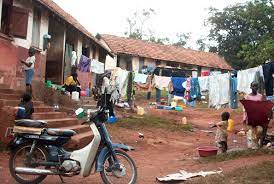 The report by the Committee on Physical Infrastructure found that the Uganda Lands Commission (ULC) has allocated over 50 acres of land to private persons as opposed to a sole investor to construct an ultra-modern satellite town.
While presenting the report on 4 May 2021, the Committee Chair, Hon Robert Kafeero said the committee learned that the Chairperson of ULC informed the President that the rationale for allocating the land to several persons as opposed to a sole investor was to avoid reoccurrence of the situation where a single investor, Opecprime Properties failed to develop the land.


“The Committee recommends that ULC should subject the applications of the allocatees to a rigorous due diligence exercise to ensure that they are technically and financially capable of developing the land,” he stated.
This however, stirred debate from the legislators who accused the committee chair of not providing the right information, with allegations that he is aware that the land is being shared among individuals whose agenda is not in tandem with the government plan.

Speaker, Rebecca Kadaga questioned how the allocations were done, saying that some companies have not indicated their investment plans

“Nobody is against the establishment of a modern city but the allocation was not transparent. Sitting tenants are not catered for,” said Kadaga adding that,’there is a lot of government expenditure on renting yet there is a lot of land’.

Kadaga directed that government should not make any more allocations on the land until a proper plan is presented for the former sitting tenants, as well as a proper physical plan for the modern city.
Kadaga’s guidance on the matter was prompted by a motion presented by Hon. Gilbert Olanya, the Kilak County South mp who moved that the report of the committee is rejected in totality.

Seconding the motion, Bugabula South MP, Hon. Henry Kibalya said the report was lacking vital information because the committee did not interact with the affected stakeholders.

“We need to give ourselves time; whether this report is pushed to the 11th Parliament, let us do it. We need to resolve this matter,” he said.
Hon. Joseph Ssewungu, Kalungu West mp agreed with his colleagues, saying that a report in which the Attorney General was not consulted is lacking.


“I have information that some of the committee members disagreed on this report even if their signatures are here. We need to carry out thorough investigations on that land,” he said.
In their earlier submissions, MPs, decried the corruption in handling land matters citing the 2007 saga in which Shimoni Demonstration School was demolished to pave way for the development of a hotel to host some of the delegates attending the Commonwealth Heads of Government Meeting (CHOGM).
The Leader of the Opposition, Hon. Betty Aol Ocan criticised government for what she termed as failure to prioritise citizens at the expense of foreign investors.

“We went to Naguru when those people were evicted and found them crying with nowhere to go. We should love our country and know that there are many more generations after us who will need these public resources,” said Ocan.

“I mourn the actions of our government for mismanagement of land in this country thereby causing chaos. Who bewitched this government,” lamented Hon. Agnes Ameede.
The Minister of State for Urban Development, Hon Isaac Musumba refuted claims that the land has been allocated to individuals saying that government will maintain the plan to transform Nakawa-Naguru into an ultra-modern satellite city.


“The new physical plan sets pace for modernizing Kampala and avoid slums. There should be no plots of land not less than three acres and no residential houses less than three floors while commercial buildings should not be less than four floors,” Musumba said.
The committee’s inquiry into the status of the Nakawa-Naguru housing follows information from whistleblowers on the alleged give away of the land which has been earmarked for development into an ultra-modern satellite city since 2007.