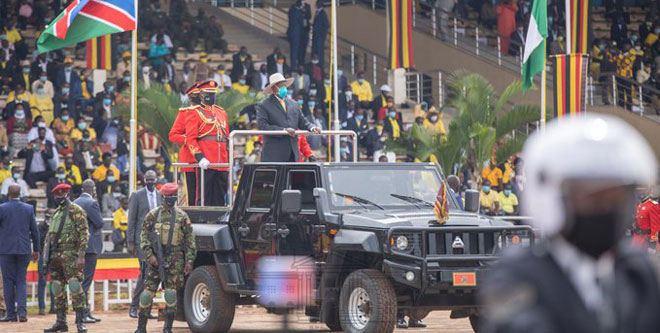 Uganda’s longest-serving President Yoweri Tibuhaburwa Museveni 76, was sworn in on Wednesday for his sixth-elective term of office at Kololo Independence Grounds.

President Museveni attacked the western countries over what he says is a tendency to interfere and lecture Uganda and Africa about governance and democracy. Museveni was speaking during his inauguration ceremony during which he was sworn in for the 7th time as the President of Uganda.

Below we bring you excerpts from his speech

In the last 35 years, the economy has been growing at the rate of 6.2% per annum. It now stands at US$40.5billion if you use the exchange rate method and US$116billion, if you use the PPP method.
With the activation of the oil sector, which has been dormant ever since 2006 when we discovered the petroleum and if you add the expected average growth rate of 6% per annum post Covid-19, the combination will expand the economy to an estimated US$67billion by 2026 using the exchange rate method and US$193billion, using the PPP method; meaning that the economy will be growing at the rate of between 9- 10% in the initial years of oil production.
This rate of growth, although reasonable, is not what I want. With the rise of the literacy rate from 43% in 1986 to now 76.53%, we can achieve much-faster rates of growth and I will see to that. We have achieved rapid rates of growth in some sectors. These isolated positive rapid rates of growth, can be generalized throughout the whole economy.


The elections are over. Let us get down to work

The elections are over. Let us get down to work. The four (4) economic sectors where there are jobs and wealth are: commercial agriculture with ─ counting profitability; industries; services; and ICT.
With your individual savings, collective savings by groups, borrowing from banks, or with Government support, you should enter one or more of these sectors so as to chase poverty from your homesteads, create wealth and jobs for some of your family and also for others.

The corona pandemic hit some sectors badly, especially the hotels, the performing arts, the boda bodas, the sportsmen, etc. This financial year and the next financial year, we have put aside Shs464billion (about US$130million) to help these groups as soon as the residual lockdown is removed.
The UDB will be further empowered to give low-interest loans to manufacturers, agricultural entrepreneurs and some actors in the services sector ─ tourism, etc.


As far as corona-19 virus is concerned, we shall open up once we have vaccinated fully 4.8million
To fight corruption of Government officials including magistrates
To intensify the struggle for social-economic transformation, we shall aggressively and without compromise, deal with some obstacles.

There was some resistance by some parasite groups to our policies of creating and properly using the wealth funds (OWC, Youth, Women, Emyooga, etc.); implementing free education in Government Primary and Secondary Schools; providing free vaccines and therapeutic drugs in Government health centres; protecting bibanja (tenants) owners on the iniquitous mailo land system; ensuring that the feeder roads are in good condition following the provision of good road equipment to all the districts; fighting corruption of Government officials including magistrates and the Policemen; and dealing decisively with the cattle thieves and those who steal crops from the gardens.
The wealth funds will be concentrated at the Parish, in the Parish Model, except for the myooga (specializations) funds that will remain at the constituency. The wealth funds, unlike in the past, will be controlled by the members and not by Government officials (CAO, OWC, etc).


These funds will, henceforth, be members-owned and run. The only prohibition will be to divert the money to the non-mission areas. The allocations will be grants to the Parish SACCOs. In the past, it was Government officials to select beneficiaries. The members will now prioritize the allocations themselves.
With free education, after due considerations, there will be no head-teacher, that will be tolerated if he/she re-imposes school charges. Dealing with corruption and stealing drugs, part of the solution, will be E-Government. All Government transactions, will be computer-based; no more human to human contact. This will be easier to monitor even for remote supervisions

When some actors[ i 2011 The UK, US and France attacked Libyan leader Col Muammar Gaddafi’s forces in the first action to enforce a UN-mandated no-fly zone- editor] started attacking Libya against the decision of the African Union, I contacted H.E. Jacob Zuma of South Africa for African Armies, that so decided, to intervene in Libya and confront and teach a lesson to those aggressors.
We were let down by Muammar Gaddaffi who abandoned Tripoli without a fight. Although, at that time, I did not have direct link with Muammar Gaddaffi, I advised his envoy who came to see me, to turn Tripoli into a Stalingrad. With H.E. Jacob Zuma, we had to work out a solution for the aircraft and cruise missiles that attack defenceless people from far away, so that if the aggressors so wished, could come on the ground and we fight man to man.
Unfortunately, the Libyans collapsed quickly. On account of that, much of North West Africa, has been with security problems that were not there before: Libya, Chad, Mali, Niger, parts of Nigeria, Central African Republic and Cameroon.


Who is responsible for this haemorrhage? Of course, Muammar Gaddaffi had his own problems. I had had the task of fighting him twice ─ 1972 and 1979 ─ as he intervened in Uganda on the side of Idi Amin because he was a Moslem. However, foreign armies attacking an African country against the express objection of the African Union, is not the solution.


The huge concomitant suffering of the Africans in Libya and the surrounding countries, has proven that, if any proof was needed.