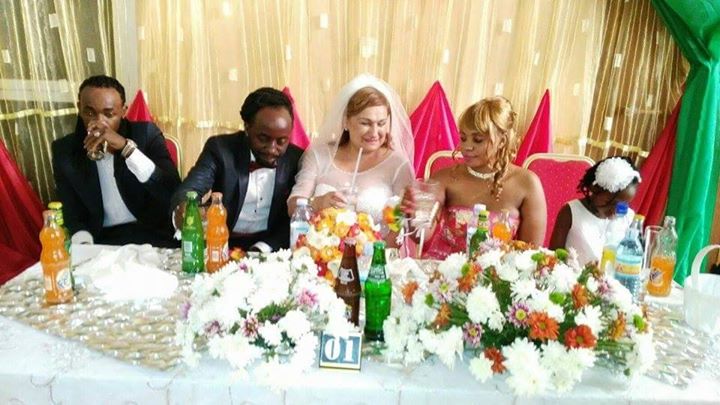 Rasta Bob- Dee alias Muwanga David of Kasanga who disguises as a businessman and real estate owner recently wedded a one Demi Flessa, a 55 year old Australian in a highly controversial civil wedding at Hotel Triangle after staying together for about three weeks in Kampala.

Rasta Bob- Dee ‘marriage’ with Demi Flessa reminds us of a Hollywood film Spread by Ashton Kutcher in which a Young, charming and handsome Youngman who lives the good life in Hollywood by giving rich older women plenty of what they want-Sex.

Timeline of the Relationship

It all started when Bob Dee met Demi on social media three months ago through a friend. According to close friend, the relationship started there and then.

Our source has it that the froth began when Demi told David about her problem of not being able to inherit anything from her aging father unless she got a child of her own.

Bob Dee quickly suggested marriage as a way of enjoying the old woman’s property and more so a Visa to Australia. Demi now in her menopause, decided to carry out an IVF to have a child with David because she cannot now get pregnant naturally.

Rasta Bob Dee who has been in numerous relationships with women from Uganda and pensioners from USA, Canada and Denmark is a father of multiple kids from dozen mothers.

The clever Rob Dee lied to Demi that he has no kids when the flower girl was his biological daughter. The lovebird claims to have adopted this young girl from his deceased brother.

On the wedding day or what Rasta Bob father called an improper wedding, Demi walked to the aisle with a stranger. She was very happy to be getting married to vibrant young man who did not tell her of his dark side.

According to an eyewitness, after joining David and Demi as husband and wife, the celebrant judge asked the groom to kiss the bride. The groom never did so. He just pecked the bride and quickly sat down but the celebrant insisted and told them to stand up and let the groom kiss his wife.

When it came to speeches, David’s father Mr. Muwanga expressed his gratitude to his son. And more so, the choice he made but refused to give the newlywed couple a present because he didn’t think that was a proper wedding since the greater family were absent on the wedding. He called on the son to do a proper wedding, which as a must be held in their home village in Masaka.

When Newz Post reporter approached the celebrant judge for comment shortly after the wedding, the judge noted that she has had just joined disorganized couple but she had to do her job.

This reminds of us of an old Mexican soap opera “Love, lies and money”