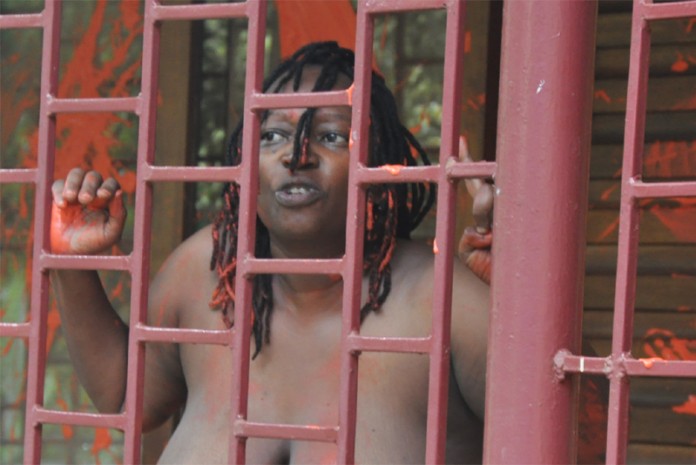 The Makerere University lecturer Dr. Stella Nyanzi shocked the country when she recently went naked in public. As expected, she managed to get some good Ugandans to support her actions.

You must be asking yourself why her husband silent? Where is he? May be her frustration (read nudes) is related to her strained relationship?

While studding for her PhD in the UK, Stella Nyanzi, the mother of three, met a man of her dreams. The man was an African originating from the Gambia. They fell in love and got married in the UK. The two lovers produced their first daughter Baraka and later the ‘good’ professor gave birth to twins.

Stella Nyanzi loved her husband Ousman so much just as you would expect a lovely woman with PhD in Sexual behaviours to do. But what followed thereafter was not good.
After her PhD, Dr. Nyanzi returned home. The husband kept in London promising to come very soon to join the family. Little did Stella Nyanzi know that it was her last time to see Ousman.

A few days after she had arrived in Uganda, Dr. Nyanzi was shocked to receive a phone call from the Ousman who told her to be brave, look for a job and look after the family.

Dr. Nyanzi asked him when he will be coming to Kampala. The Ousman told her that her focus was on securing an asylum in the UK. Dr. Stella Nyanzi was confused.

“Stella, I am never coming back to Africa, at least not until I get to process my asylum here, get settled in a council flat and start earning the dole or a decent salary” the lovely Husband coldly stated.

“But how will you get asylum yet you are already in the UK?” Stella asked naively.

She went ahead to ask him why he is not joining them in Kampala?

‘‘How will I survive without you? I will die of missing you. How will I raise the children without you? How will I carry and produce the twins alone? How will I manage all this on my own?’ I asked him with tears wrecking my being.” Wrote Stella in a recent post.

After a long conservation on a phone, the Ousman finally told Stella Nyanzi his top secret, something he kept away from her for all the years they have been together.

‘‘I am going to say that I am a homosexual man who will be persecuted in my home country of The Gambia, should I go back. The immigration officials know that the Gambian president threatened to behead gay people found in his country. They will grant me asylum here’’ the lovely husband reportedly told Stella Nyanzi.

Stella Nyanzi, who was by then pregnant could not know what to add on.

This was the time, when one of Africa’s known dictators Yahya Jammeh the president of Gambia, ordered for the public execution of all gays. It was this reason, Ousman was not returning to Africa, but what if he came to Uganda to be with his family?

Again, would Professor Stella Nyanzi feel contented with marrying a bisexual? Hello, No, this was one of her saddest moments in time.

“I nearly died from that phone call. I cried for many days on end. I was puzzled about a million things in my marriage. I wondered whether I was married to a bisexual without knowing. I wondered how to explain all this madness to my family and my children. I blamed myself for taking Ousman to the United Kingdom. I was so depressed that I had three miscarriage threats in my first and second trimesters. I survived the crisis only because of the unconditional love and support of my late father, mother and three sisters.” Writes Dr. Stella Nyanzi

Her Children have never seen their father, only the eldest daughter Baraka saw him, but she was still too young to recognise him.

From that day onwards, Professor Stella Nyanzi has been single. A single mother whose husband seems dead in as much as he is living.

Dr. Nyanzi is responsible for her children, herself and all that she has to do as a head of a family. She has never married again, and has never produced again.

Firing her from work means that the Professor whose family depends on her won’t only be threatening her well being but also her children’s.

Sometimes people tend to blame the fellows not knowing the life they have passed through, but many have passed in a hell, its only their strong might and the Almighty God that they can still raise their heads in public again.

Her twins will make be making eight years next week and her daughter Baraka is soon making it 11.

Stella Nyanzi is a medical anthropologist with a PhD from the University of London based on ethnographic fieldwork of youth sexualities, sexual and reproductive health in The Gambia.

She has fifteen years of social science research experience in rural southwestern and urban central Uganda in the broad areas of heterosexual behaviour in the time of HIV/AIDS, adolescent sexual behaviour, female control of sexuality, transforming masculinities during the AIDS epidemic, the gender differentiation of reproductive health, alternative healing – specifically Balokole Pentecostal healing of HIV/AIDS and transforming perfomances of death, disposal and widowhood.

Her current research at MISR comprises ethnographic inquiry into the politicisation of homosexualities in contemporary Uganda – with a focus particularly on unpacking mainstream religious framing of and contestations about sexual citizenship. Dr. Nyanzi is also conducting research about the vulnerability and resilience of young (refugee and internally displaced) women in Uganda towards HIV/AIDS.