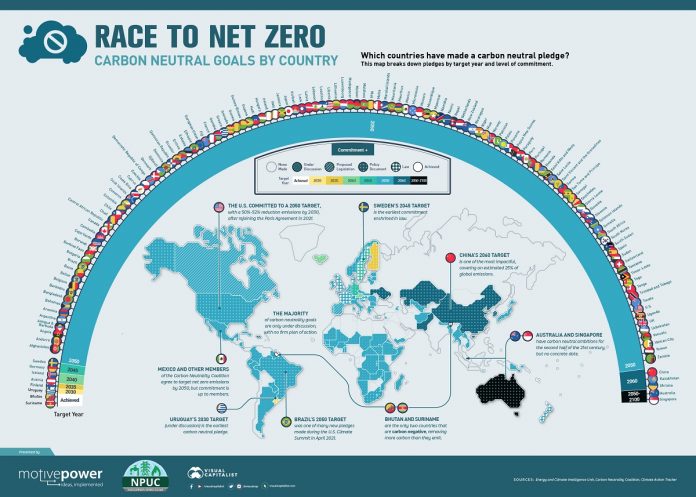 When we gathered in Paris in 2015 to hammer out the historic climate deal, few of us dared hope that by 2021 more than 60 countries—representing over half of global emissions—would have committed to net zero emissions by mid-century.
In addition, 4,500 non-state actors, such as companies, cities, regions, and other institutions, have embraced a net zero target. Asset owners and managers are also now stepping up, with over $40 trillion of assets under management committed to net zero portfolios by 2050.


What has brought us to this inflection point of hope edging out despair?

Innovation—in institutions, understanding, technology, and leadership. The Paris deal itself was hugely innovative. Politics ruled out a legally binding treaty, so a new approach had to be forged.
Fiercely criticized by some for its voluntary nature and non-binding targets, it was predicated on the belief that despite a modest first round of commitments, growing scientific evidence, falling technology costs, and rising citizen demands for action would lead to more ambitious targets over time. Recent evidence appears to support this hypothesis, although it will be essential to continue to ramp up ambition in the years ahead if the Paris Agreement’s targets are to be met.
There has also been innovation in the economic understanding of climate change. Not long ago economists, politicians, and business leaders overwhelmingly believed in a trade-off between climate action and economic growth.
The cost of action today had to be weighed against the benefits of avoided costs in the distant future, with the discount rate a major focus of debate. This view has been largely replaced by an understanding that smart action against climate change doesn’t only stop bad things happening, it leads to increased efficiency, drives new technology, and lowers risk.


These benefits in turn stimulate investment, generating jobs, creating healthier economies, and boosting the livelihoods and well-being of citizens, even in the near term.
We’ve also seen important innovations in leadership. When in 2019 the Intergovernmental Panel on Climate Change (IPCC) concluded that the risks of 2°C average warming were simply too great, and recommended a maximum warming of 1.5°C, it implied a considerably more difficult task ahead.
Many expected climate leadership to evaporate in the face of a much steeper hill to climb. However, once the magnitude of the necessary revolution became apparent, enlightened leaders recognized that they had to be all-in to manage risks and seize opportunities.
Investors, staff, and customers wanted visionary leaders on the right side of history. To be sure, there are business and political leaders, as well as critical segments of the population, who have vested interests in maintaining the status quo and are resisting change, but the discourse is quite different today than it was only a few years back.
Most dramatically, of course, innovation has driven down costs and introduced new technologies, and this must pick up speed throughout the current decade.


A disruptive decade ahead

Despite this good progress, we are far from an emissions trajectory that avoids even worse effects of climate change. Even if pledges are fully implemented, there remains a wide gulf between our current emissions path and one that achieves the Paris Agreement’s goals. Communities around the world are seeing the impact of just 1°C of warming, from extreme heat to uncontrollable fires to withering food crops to disappearing ice. The future world will be increasingly unrecognizable unless we transform our actions.
Consider the scale of transformation required to limit dangerous warming. The share of renewables in power generation must move from about 25 percent today to almost 100 percent by 2050, and unabated coal will need to be phased out six times faster than it is today.
We must renovate our buildings with zero-carbon heating and cooling and improved energy efficiency at a rate of 2.5–3.5 percent by 2030—significantly higher than today’s rate of 1–2 percent. While crop yields are expected to rise in the coming decades, according to the UN Food and Agriculture Organization, they must do so even more quickly on existing lands in order to meet a growing population’s food needs without encroaching upon forests, doubling recent rates over the next 10 years.
This growth must at the same time avoid agricultural expansion and maintain soil health as well as water quantity and quality.


Innovation will be critical to achieving these goals. The International Energy Agency’s (IEA’s) new net zero roadmap notes that the needed decarbonization by 2030 is largely achievable with readily available technologies, but by mid-century almost half of required emissions reductions will call for technologies that are not yet on the market. Reliance on technologies still under development is even higher for harder-to-abate sectors, such as long-distance transportation and heavy industry.
Three innovation opportunities alone—direct air capture and storage, advanced batteries, and hydrogen electrolyzers—can deliver roughly 15 percent of cumulative emissions reductions between 2030 and 2050. Efforts to spur innovation must focus not only on research and development of these technologies but also on the technologies and infrastructure these solutions depend on, such as integrated grids and battery storage.
Some trends already show incredible promise. Battery pack prices have fallen almost 90 percent over the past decade. We have seen exponential growth in renewables, now the technologies of choice in many places. And electric vehicle (EV) sales have accelerated, with a growing number of governmental phaseouts of internal combustion engines, subsidies to increase EV demand, and car companies’ embrace of EV fleet targets.

The famous slogan from climate protesters, “systems change, not climate change,” gets it right. Incremental change that doesn’t quickly lock in a different trajectory will not deliver the change we need. Change must be systemic. History has demonstrated that seemingly impossible change can come about, but only when the right combinations of drivers come together.
Incremental change that doesn’t quickly lock in a different trajectory will not deliver the change we need.
Addressing the climate crisis will also require innovation in many other arenas, such as finance, institutional design, novel partnerships, philanthropy, and international cooperation, to name a few.
Take technological carbon removal, for example. The IPCC and National Academies of Sciences suggest that, by mid-century, 8–10 gigatons of carbon dioxide (GtCO2) may need to be removed annually, but we cannot rely on any one approach to achieve that scale. Natural approaches, such as landscape restoration, may remove 5–6 GtCO2, with significantly renewed efforts, but engineered approaches such as direct air capture and storage will be needed as well if we are to remove and store carbon as much as the latest science suggests is necessary.
Yet many technological approaches remain at the earliest stages of development and require drastic cost reductions. Only a few companies are piloting direct air capture today. Scaling capture and storage will not only rely upon technological innovation to reduce energy inputs and costs, it will also depend on policy support such as tax credits, greater market demand, and public and private investment, among other factors. And in addition to support for the technology itself, another set of drivers must come together to support its enabling infrastructure.
The decarbonization of cement production, one of the world’s most energy intensive materials, is another example of the need for innovation. Demand for cement is growing far more quickly than innovation is offering solutions. For a 1.5°C compatible pathway, the energy intensity of cement production must drop 40 percent in the next decade. Emissions-cutting strategies, such as novel cements that require less heat to produce, and the use of carbon capture and storage are not fully mature. In addition to investments in large-scale demonstration projects, scaling will require supportive policies such as low-carbon performance standards and updated industry standards. Public procurement incentives and mandates will also be key to stimulating demand.


Financing needed
The IEA estimates that $90 billion in public financing is needed as soon as possible to support demonstration projects for the energy transition before 2030, though only $25 billion is budgeted over the next decade.
We must find new ways to leverage private investment while boosting and better aligning government spending. Policy and regulatory frameworks tailored to an innovation agenda and additional reduction of risk are needed to attract more private investment. Developing economies in particular need significant support—in the form of financing, technology transfer, and capacity building—to reap the benefits of innovation and move to a low-carbon future.


With the right support, society’s transformation could take off in a way previously unimaginable—providing tremendous opportunities, including new job opportunities and the creation of whole new industries. It could also provide significant health benefits—for example, through air quality improvements. But it must be properly nurtured.
The transformation will no doubt be disruptive. Governments measures must ensure that transitions are just and equitable, especially for workers and industries currently tied to a carbon-intensive future. Our recovery from COVID-19 presents a near-term opportunity to reshape our current systems and advance solutions for the future—instead of further locking in our fossil-fuel-intensive past.

KELLY LEVIN is chief of Science, Data, and Systems Change at the Bezos Earth Fund.

ANDREW STEER is president and chief executive officer at the Bezos Earth Fund.