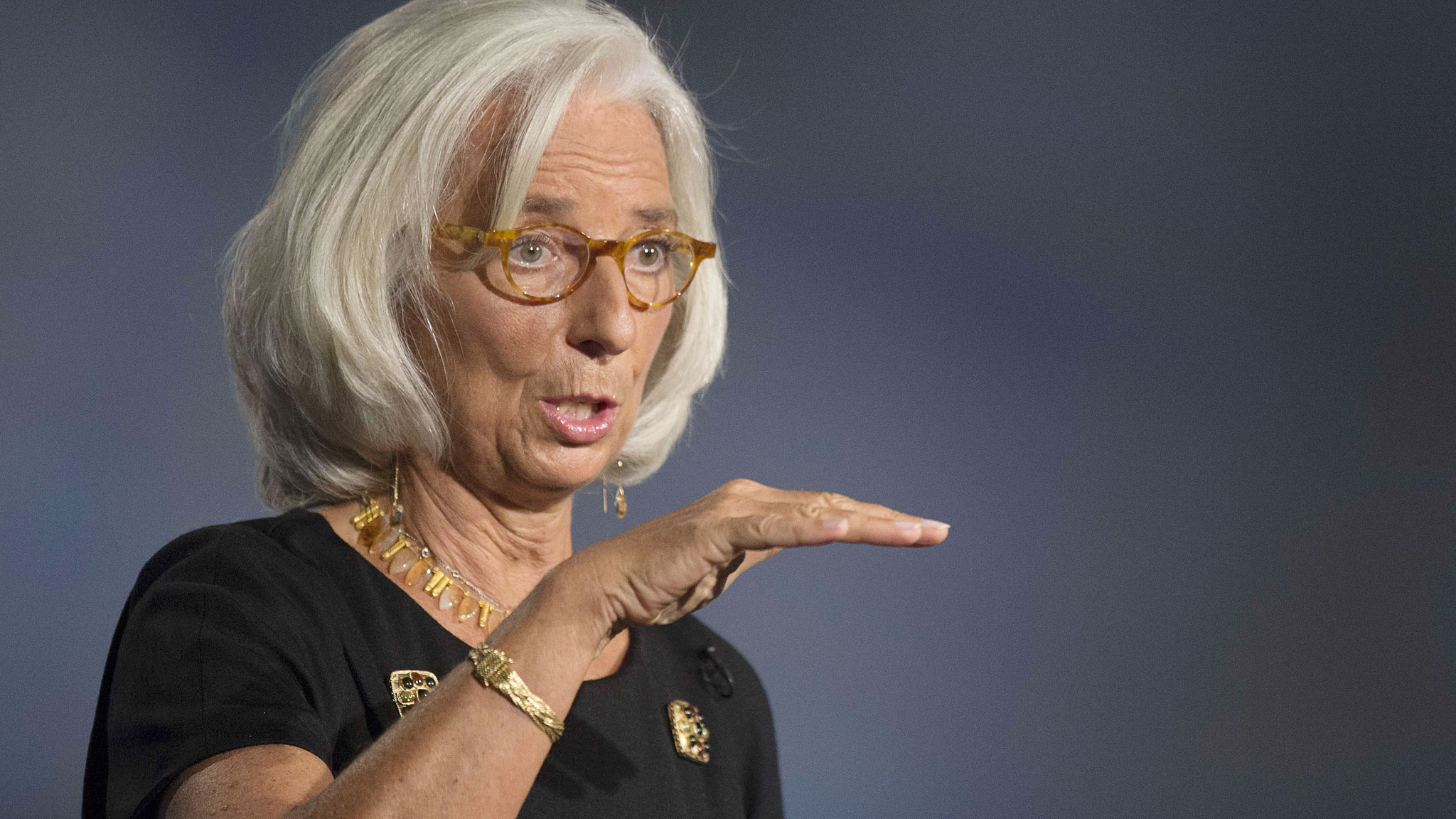 Uganda has experienced a threefold increase in per capita GDP over the past generation. And you have reduced extreme poverty to one-third of the population.

This made Uganda one of the countries that has more than achieved the United Nations Millennium Development Goal of halving poverty by 2015.

This is an African success story.

Yet as I listen to people here in Kampala, I hear a note of concern. I hear that progress is no longer coming fast enough, and that millions of Ugandans still live in poverty. Growth has lagged—partly because of global circumstances beyond Uganda’s control.

But this is not just a matter of global demand. Uganda is grappling with challenges familiar to many developing countries.

This contrast of success and uncertainty speaks to me of last year’s movie “Queen of Katwe,” a story about Uganda that so captivated international audiences. You will recall that in the film, the young chess master, Phiona, poses two questions:

First she asks: “Can you do big things from such a small place?”

I believe that Uganda already has answered that with a resounding “Yes!”

Phiona’s second question looks to the future: “How can I become the champion?”

This is the challenge you face. The policies that Uganda chooses today will determine whether you are on a road to overcome poverty and provide opportunities to all Ugandans.

So in the time I have with you, I would like to address how Uganda can rise to the challenge of development, and become a champion. To this end, I will address the global and regional economic landscape, within which Uganda can build and sustain development momentum with the support of the IMF its longstanding partner.

The Global and Regional Economic Setting

Let us begin with the big picture. Sub-Saharan Africa is increasingly integrated into the global economy. The region weathered the 2008 global financial crisis in large measure because it had pursued sensible policies that reduced debt and built up ample reserves. It also helped that demand for natural resources from China and other emerging market countries quickly rebounded.

In the past few years, however, the wind has turned. Emerging market demand has slowed significantly, and many advanced economies continue to struggle. Commodity prices have fallen sharply. Access to market financing has tightened.

While there are recent signs that global growth may be picking up, there are still serious risks. These include rising protectionist sentiment. Restrictions on trade are never helpful, but they would be even more damaging now, given that global trade has slowed since 2012.

Sub-Saharan Africa’s growth in 2016 was the lowest in 20 years at about 1.5 percent, and is projected to reach only 2.7 percent in 2017. Commodity exporters have experienced a particularly rapid deceleration.

The policy response in many African countries has been delayed and incomplete. So the end result has been uncertainty. Private investment is falling, stifling new sources of growth.

But so far, it has been a tale of two Africa’s. Notably, East Africa has been one of the region’s brighter spots. This is partly because policy frameworks have been more effective, and also because its more diversified economies are less reliant on volatile commodities. The end result has been stronger growth. But, here too, challenges remain.

Uganda fits right in the middle of this group of East African countries: growth has hovered at about 5 percent a year—better than many, but not enough to spur the swift development that is so needed. With increased infrastructure investment and the oil sector moving forward, growth could accelerate to 6 or 6½ percent in the coming years. The question is how can Uganda seize opportunities to sustain strong growth?

How Uganda Can Build and Sustain Development Momentum

I would like to highlight several key areas where economic policies can make a difference.

First is investment in infrastructure.

You are, of course, all too familiar with Uganda’s infrastructure bottlenecks, especially in electricity and transportation. I could see the challenge myself just traveling from the airport in Entebbe to Kampala.

Under-developed infrastructure is a permanent brake on growth. It prevents businesses from connecting to local, regional, and global markets, and limits their willingness to invest. Ultimately, infrastructure bottlenecks will slow the structural transformation and industrialization that Uganda aspires to.

The government’s strategy to scale up infrastructure investment is well conceived. It is intended to lift growth while maintaining debt at a sustainable level.

But to achieve these goals means that investment must be efficient. That calls for strong institutions to keep mismanagement in check and ensure maximum value for money. There is work to be done. The World Bank has estimated that, if Uganda’s investments were better managed, annual growth could be 2.5 percentage points higher.

The good news is that the government is taking steps in this direction. Reforms aimed at strengthening investment management are being put in place. There is a new emphasis on efficiency.

Increasing resources for investment is another issue. Relying on borrowing alone to finance infrastructure would be unworkable because debt would become too high. More revenue from taxes needs to be mobilized.

Here again, there has been some progress, with tax revenue increasing in the past few years. Even so, Uganda is still only halfway to the East African Community’s goal of raising tax revenue equal to 25 percent of GDP.

What more might be done? One concrete measure might be to strengthen VAT administration and remove some exemptions on the VAT and corporate income tax. The IMF estimates that this could raise revenue by 3 percent of GDP or more.

Improvements in this area have been at the heart of Africa’s economic success over the past 20 years. Uganda’s track record also has been strong. But there is no room for complacency, especially as your country’s oil sector develops.

If oil is to contribute positively to Uganda’s future, then it is essential to avoid the “curse” that has plagued many other oil exporters. A strong transparency and accountability framework will go a long way toward ensuring that the new oilfields serve the national good and benefit all Ugandans.

You already have well-designed plans to channel all oil revenue to the Petroleum Fund, and from there to budget support and the Petroleum Investment Reserve. The IMF is ready to continue assisting you in this area, in preparation for the day oil begins to flow.

Regional economic integration is another policy area that can make a big difference for Uganda’s economy. Opportunities for trade and investment abound within the East African Community and its market of more than 150 million consumers.

Last November, the IMF co-hosted a conference in Arusha to take stock of the EAC’s progress and discuss what needs to be done to realize the full potential of a united bloc.

The Single Customs Territory has been established, and the Common Market is advancing. But infrastructure continues to constrain progress, and more work remains to be done on customs, taxes, and investment. If these issues can be addressed, the East African Community can emerge as a true source of economic dynamism.

In addition, there is another “community” emerging in Africa: the community of cross-border banks. Some are Pan-African Banks. Others are regional institutions, as in East Africa.

These African banks have moved into the space vacated by other international banks that withdrew from the region after the global financial crisis. This offers new opportunities for countries such as Uganda. But it also presents new challenges for bank regulation and supervision that require unprecedented cooperation.

So far, I have focused on infrastructure, institutions and regional integration. What does that leave?

Perhaps the most important policy challenge of all: inclusive growth. I started by pointing to Uganda’s achievements in poverty reduction. If this trend can be continued, there will be clear benefits.

It will not be easy. I recognize that there will always be competing demands. Governments constantly need to balance priorities. For Uganda, even as investment is ramped up, it is essential to make resources available for social spending.

IMF research shows that more inclusive societies tend to grow faster and more sustainably. If inequality in Sub-Saharan Africa could be reduced to the levels of Southeast Asia, growth could be consistently higher. New research that we are releasing today focuses on the relationship between inequality and reforms in key areas such as fiscal policy, the financial sector policy and agriculture.

Reducing inequality requires several things: good jobs for young people, a strong emphasis on education and health care, and assistance to the poor, including a social safety net.

Queen of Katwe showed how this works by illustrating the importance of mentoring in a girl’s life. So we need to ask: How many young people are there in Uganda who might shine, given the chance? How many young women would excel on a level playing field? Indeed, I would argue that equality is as much about gender as it is about income!

Financial inclusion is also key to overcoming inequality. Uganda has made considerable progress in this area, including through the spread of mobile banking. But it still lags behind other East African countries when looking at how many adults have bank accounts. And Ugandan women have much less access to banking than men.

There is so much more that can be done to achieve inclusive growth.

How the IMF Can Work with Uganda

In all of these key policy areas, the IMF is ready to help. We have a very strong working relationship with Uganda—and I would like our partnership to become even stronger in the future.

At present, the core of our cooperation comes under our Policy Support Instrument, which provides a framework for many of the issues that I have been discussing.

Another crucial area of IMF support is technical assistance and training—capacity development. In Uganda, we are supporting your government’s effort to improve tax administration, public financial management, and financial sector stability, among other areas. We are trying to help as much as possible. We are at your service.

In conclusion, it is clear that the challenges Uganda faces are substantial: infrastructure investment, stronger governance, regional integration, and a focus on social programs that can reduce inequality.

If you tackle these challenges, you can spur stronger growth that creates good jobs for your young people. You can lay the foundation for continued success.

During my visit I have been impressed by Uganda’s energy and entrepreneurial spirit. I sense that Kampala is a hotbed of start-ups and innovators. Given the right environment, including good infrastructure and a skilled work force, these businesses can strike a spark that could spread throughout the Ugandan economy.

This is where hope comes from.

We look forward to continuing our partnership with you so that Uganda can sustain hope and emerge as a Champion!