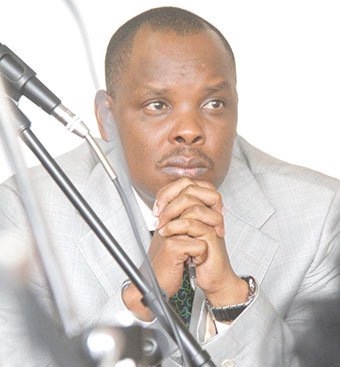 City lawyer Bob Kasango is dead. He died on Saturday evening at Luzira prison, were he was serving a 16 year jail sentence in the controversial pension case.
Prisons spokesperson, Frank Baine said Kasango who condition deteriorated at around 8pm died as he was being rushed to Mulago, adding that the body is at Mulago for a postmortem report.
Kasango was in 2018 convicted and sentenced to 16 years imprisonment for unlawfully accessing money meant for prisoners.


Andrew Mwenda described Kasango as one of the best lawyers in town, and a kind person.
“My brother and best friend, Robert Aldridge Kasango aka Q, just died in Machison Bay Hospital inside Luzira prison this evening. One of the best lawyers ever, Q was also an intellectual, a great poet, journalist, sports analyst, humanist and a very kind and generous soul. RIP,” he said on twitter.
‘’I became friends with Bob Kasango probably at the zenith of his career. He was coordinating South Sudan (mediating between Kiir & Machar), involved in Rwanda-Uganda relations and had set precedents in the Ugandan Constitutional Court. I was 18 years old.’’ Tweeted another lawyer Silver Kayondo

The Anti-Corruption Court in 2018 sentenced lawyer Kasango to 16 years , former Public Service officials Jimmy Lwamafa (9), Christopher Obey (14) and Stephen Kiwanuka Kunsa (9) in jail for theft of sh15 billion meant for pensioners. It was said that the money was paid onto Kasango’s firm’s account as legal fees meant for payment of pensioners yet he had never represented them in court in the case against the Attorney General and they won.
Justice Margaret Tibulya of the Anti-Corruption Court found him and the three officials guilty of diversion of funds, fraud, forgery, theft, and conspiracy to defraud government funds.


She ordered that in addition to the 16 years in jail, Kasango should also compensate the government ugx. 05 billion. Lwamafa was also ordered to compensate government 3 billion shillings.
Tibulya said that court relied on the recorded evidence by John Keitirima, then a registrar at the Civil Division of the High Court and now a Judge of the High Court.
Keitirima told court how Kasango allegedly asked him to help cover the forgeries so he can get money from government.
The forged court documents included a bill of taxation and certificate of order purportedly issued by Charles Abola and 6,337 ex-servicemen who had sued Government demanding their pension.


According to the Commissioner-General of Prisons, Kasango’s sentence was to expire on December,20, 2034 but if he maintained good behavior, the earliest possible date of release would have been August,31, 2029.

So sad Bob Kasango has died in prison. This world is not our home. Once a budding lawyer 😭.