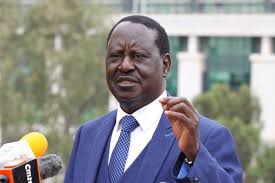 National Super Alliance leader Raila Odinga has demanded fresh elections by August but ruled out any plans to lead a coup against President Uhuru Kenyatta.


In the interview with BBC, Mr Odinga maintained that he did not recognise Mr Kenyatta as the President “since he does not have the legitimacy of the people”.

Mr Odinga, who was sworn in as the “people’s president” last week, appeared to backtrack on his pledge to name a cabinet, saying he would push for the creation of a people’s convention to deliberate on matters from regional assemblies instead.


“We are going to deliberate on a number of issues such as electoral justice, reform of the Judiciary, restructuring of the executive power among others,” Mr Odinga said.