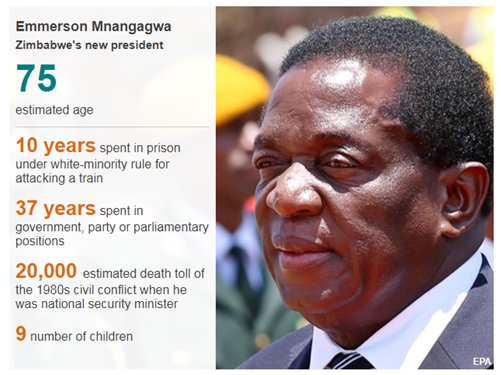 
Emmerson Mnangagwa 75, the man known as “The Crocodile” was on Friday sworn in as Zimbabwe’s president.
Taking his oath of office before Chief Justice Luke Malaba, Mnangagwa pledged to uphold and defend the constitution and the rights of Zimbabweans.


“I will promote whatever that will advance and oppose whatever that will harm Zimbabwe. I swear that I will protect and promote the rights of the people of Zimbabwe,” he said.
He paid tribute to Robert Mugabe, a founding father of the nation:
‘‘He led us in our struggle for national independence he assumed responsibility of leadership at a challenging time… that is to be lauded and celebrated.”


He said despite errors Mr Mugabe might have made: Let us all accept and acknowledge his immense contribution to the building of our nation. ‘‘To me personally he remains a comrade in arms and mentor.”
Buses brought well-wishers to the 60,000-capacity stadium from the early hours of Friday.
Leader of the main opposition Movement for Democratic Change Morgan Tsvangirai received rapturous applause as he arrived at the packed stadium.
“The task at hand is that of rebuilding our country,” he said near the start of his conciliatory address. “I am required to serve our country as the president of all citizens regardless of colour, creed, religion, tribe, totem or political affiliation.”

People sang and danced in the stands and raised banners reading “Dawn of a new era” and “No to retribution”, even as human rights activists began to report worrying details of attacks on close allies of the former first lady, Grace Mugabe, and their families. Mnangagwa himself has warned against “vengeful retribution”.
He also vowed to tackle corruption, reimburse the farmers whose land was seized under his predecessor, Robert Mugabe, and protect foreign investment in Zimbabwe.
He went on to say that Zimbabwe’s land reform was inevitable and cannot be reversed as that would be a betrayal of the liberation struggle.


But, the new president promised to compensate those farmers lost land in the controversial land policy of Robert Mugabe’s government.
He hailed the “voice of the people” during a dramatic ascent to power.
But some wonder whether a man who loyally served Mugabe for decades can bring deep change to a ruling establishment accused of systematic abuses of human rights and disastrous economic policies.

Mugabe who was expected to attend the inauguration was unexpectedly missing. Mugabe was last seen in public on Friday. Neither he nor his wife Grace has been seen since, though they are expected to be given protection by the government.


At the inauguration ground, Zambian President Edgar Lungu and Botswana’s President Ian Khama both did a a lap of honour to huge cheers from the stands.
Zambian independence leader Kenneth Kaunda , 93 known as “Africa’s Gandhi” — received the largest cheer from the full-to-capacity stadium.


Dirty past
The new president’s hands are ‘dirty’ In particular, Zimbabweans question his role in the so-called Gukurahundi massacres in Matabeleland in 1983, when an estimated 20,000 people were killed in a crackdown on Mugabe’s opponents by the North Korean-trained Fifth Brigade.


Mnangagwa was in charge of internal security then, but has denied any part in the atrocities. Since his return to Zimbabwe this month after two weeks in hiding he has been preaching democracy, tolerance and respect for the rule of law.

READ: How Mugabe Coup was hatched- Planned in Zimbabwe — but made in China