Home Politics ‘‘People are chameleons’’ Says Mugabe as he moves into farming at his... 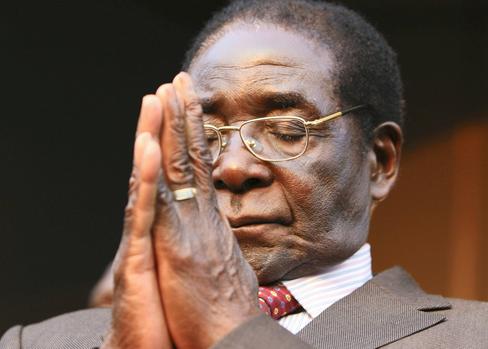 
Zimbabwe’s former president Robert Mugabe cried and lamented “betrayal by his lieutenants” when he agreed to step down last week ending his 37 years in power, the Standard newspaper said in its Sunday edition.


The newspaper quoted sources within Mugabe’s inner circle as saying the devout Catholic [Mugabe] held a rosary as he told his close associates and a team of negotiators as he was resigning.
“He looked down and said ‘people were chameleons’,” one of the sources was quoted as saying.
The state-owned Sunday Mail quoted Father Fidelis Mukonori, a close Robert Mugabe friend who mediated his resignation with the military, as saying Mugabe’s face “just glowed” after he signed the resignation letter.


President Mnangagwa [former Mugabe’s vice president and long-term friend] revealed on Wednesday evening that he had been in close touch with the armed forces as the putsch was being planned and executed.
“I was in constant contact with service chiefs throughout. I wish to thank the manner in which our defence forces and General Constantino Chiwenga have managed this process very peacefully”, he told a crowd at the headquarters of Zanu-PF.
And when he [Mugabe] called for meeting before he resigned, only five ministers turned up. Many of his ministers fled immediately when they learnt of military coup.

On 15th November, Zimbabwe’s state broadcaster interrupted its programming to air an apology by the vocal Zanu PF youth leader to army commanders for “denigrating” them.
Kudzanai Chipanga said the statement he made earlier in the week attacking the military did not originate with him. He also said he was making his public apology without coercion.
He says that “by this big mistake we have learned a lot.”

What next for Mugabe

Meanwhile, Robert Mugabe‘s nephew said Sunday the ousted Zimbabwean president was in good health and “quite jovial”
“He is fine. I have been to see him, he is quite jovial. He is actually looking forward to his new life, farming and staying at the rural home. He has taken it well.” Leo Mugabe, son of Mugabe’s late sister Sabina, told AFP.


He added that Robert Mugabe‘s wife Grace was now concentrating on plans to build a university in his honour.
“I like the spirit she has, she is with him all the time. She is an amazing person. She wants to continue planning the Robert Mugabe University so they have something to do,” Leo Mugabe told AFP
In August, Zimbabwe announced plans to build the $1-billion post-graduate university in Mazowe, 35 kilometres (20 miles) outside Harare.
Robert Mugabe and his wife will receive a “golden handshake” worth many millions of dollars as part of a deal negotiated before the resignation of the ageing autocrat last week. The exact sums to be paid to the former president and his wife Grace are still unclear,


According to Bulawayo news, Mugabe and his wife reportedly received retirement payment worth $10m. The Zanu PF official close to negotiations said that Mugabe, who was granted immunity from prosecution and a guarantee that no action will be taken against his family’s extensive business interests, would receive a “cash payment of $5m” immediately, with more paid in coming months.
The 93-year-old’s $150,000 salary will also be paid until his death. The 52-year-old first lady, reviled for her extravagance and greed, will then receive half that amount for the rest of her life.


Mugabe’s 37-year rule left Zimbabwe with a worthless currency, massive debts, an impoverished population and an estimated unemployment rate of more than 80%. Roads are rutted, many rural communities have no electricity, education is basic and healthcare almost non-existent. A life expectancy of 60 is one of the lowest in the world.


Grace Mugabe, The former secretary, who married the president in 1996, recently bought millions of dollars worth of property and luxury cars in South Africa. Her eldest son, 25-year-old Bellarmine Chatunga, recently enraged Zimbabweans by posting a clip on social media taken in a well-known Johannesburg nightclub showing him pouring a £200 bottle of champagne over a £45,000 watch on a night out in South Africa, boasting that “daddy runs the whole country”.