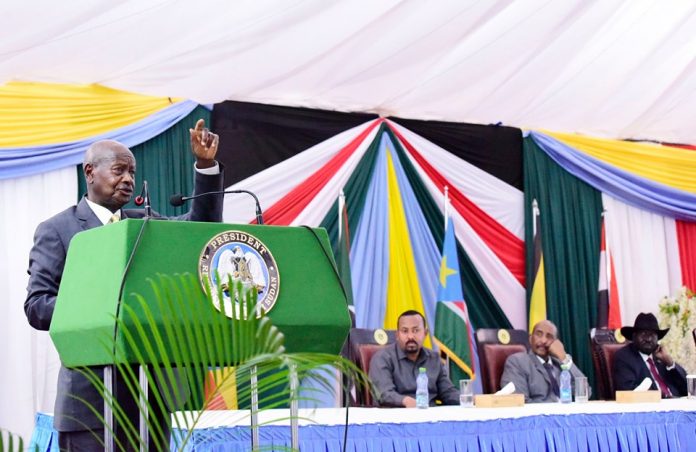 The President was on Monday afternoon speaking at the launch of the Sudan peace talks at the Freedom Hall in the South Sudan capital of Juba.
The two-months peace talks convened by the President of South Sudan Salva Kiir are aimed at bringing together the leaders of the Transitional Council of the government of Sudan represented at the meeting by General Abdel Fatah Burhan and the over 9 opposition parties in that country that are attending the talks.


Regional leaders who witnessed the formal opening of the Sudanese peace talks included the Prime Minister of Ethiopia Dr. Abiy Ahmed, the Prime Minister of Egypt Mostafa Madbouly and members of the diplomatic corps.
President Museveni using Arabic words to drive his point home told the huge gathering at the Freedom Hall that most leaders in Africa including Uganda had failed to answer the question of where prosperity of the people comes from until one author Adam Smith spelt out in his book that wealth comes from the people.


President Museveni likened managing society to a doctor who must correctly diagnose an ailment of a patient and prescribes the correct medicine.
“Political leaders, you are like doctors. Identify the problems of society and give a correct diagnosis. If you think that it is Identity then you get lost. These mistakes of misdiagnosis have gone on for too, they must be ended. Leaders if you really want to help your countries, you must stop wasting time,” he stressed.


The host President Salva Kiir thanked his guests for grazing the launching ceremony.
The Leaders of the transitional Council of Sudan General Fatah Buhran commended regional leaders for attending the opening ceremony and also thanked the opposition leaders for being present