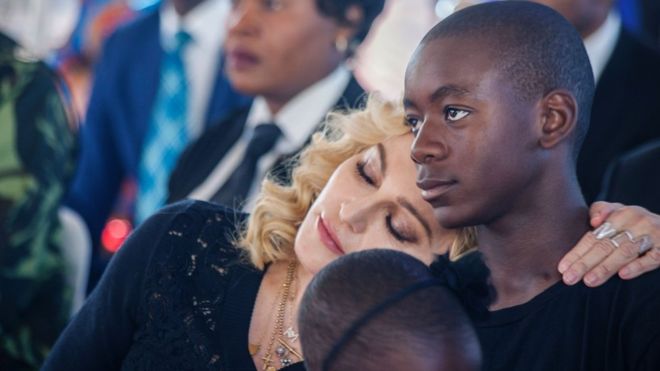 Pop star Madonna has called her son, David Banda, “the future president of Malawi” in a tweet praising the 12-year-old boy.
The US singer has six children, four of whom she adopted from Malawi.


Madonna has reportedly had a fractious relationship with authorities from the south-east African nation.
In 2013, Malawi accused Madonna of “bullying state officials”, exaggerating her contribution to the country and demanding VIP treatment.

Madonna’s manager accused Malawi’s government of having a “grudge” against the singer’s charity, Raising Malawi, which she founded in 2006, the same year she adopted David.
David Banda is the oldest of four adopted children.
His adoption raised a strong public reaction as Malawian law required would-be parents to live in the country for one year before adopting. This requirement was waived for the pop star, who told Oprah Winfrey at the time that there were no written adoption laws that regulated foreign adoption.


In 2009, the country’s high court rejected Madonna’s application to adopt a girl, on the same grounds she had not lived in the African nation for the now required 18 months.
After an appeal, the Supreme Court granted Madonna the right to adopt her second child from Malawi, Mercy James.
Last year, Malawi granted the singer permission to adopt again, and she became mother to twin baby girls Esther and Stella Mwale.
///BBC