There is something about Ugandan musicians and yachts/boats that Newz Post  doesn’t understand. Our reporter has landed on reliable information that BET winner Eddy Kenzo has ordered for a luxurious yacht  after receiving the balance of 200 million from Airtel Uganda.

Apparently Kenzo had signed a deal worth Ugx. 400 million shilling with Airtel Uganda; of this he first received 200 million which he used to clear the balance on his house.

Newz Post  has learnt that the yacht will arrive late in September and it will be even bigger than Bobi Wine’s boat. Its size will be like the one that can be hired at water front beach for parties.

Newz Post hopes that Eddy Kenzo is planning to make money out of it rather than for showing off. 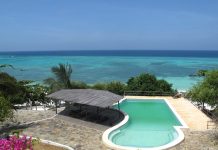 Man drowns while proposing to his girlfriend underwater in Tanzania