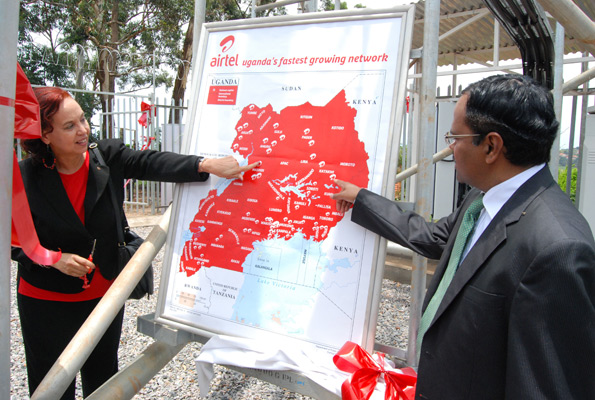 There are allegations that Airtel or Bharti could be planning to sell its Africa segment to Tigo, a claim Christian de Faria, the Africa Airtel segment Chief Executive has called “Baseless rumours ”. Below we reproduce an article we published early this year.

So is Airtel on sale? read on.

When #AirtelUganda ‘married’ Warid, there was much gusto. It was anticipated that possibly Airtel would either match MTN or become a market leader.

Two years later, it is not only proving a complex undertaking but unattainable feat. Despite the huge investment to turnaround Airtel Uganda, little progress has been made to expand the market share. This has resulted into major shake-ups in the Airtel Uganda’s top leadership as the company seeks to find a winning formula.

The last quarter of 2014 saw a series of major changes at strategic level. Telecom analysts have described these changes as a clean up to catch up with the market leader –MTN who has since widened the gap thanks to the never-ending changes at Airtel. It is at Airtel where managing directors have been changed while still in learning curve mode to understanding the Uganda’s unique market dynamics.

These changes have seen the old guard in the commercial department replaced by new entrants mostly foreigners – doing the mistakes that brought UTL to her knees following recruitment of a marketing manager in 2007 who had limited understanding of the local market. The head of sales, chief commercial officer and head of Airtel – money – among several executives – are said to be giving way. Interestingly, all replacements are coming from Tigo telecom. Is it a happenstance or deliberate?

From Tigo with magic or not

All executives filling the vacant slots at Airtel Uganda are coming from Tigo. This development makes one wonder whether Airtel is adopting a Tigo model or it is deliberate in preparation for something like a takeover.

The current managing director, Tom Gutjahr, joined Airtel Uganda in September 2014. He came from Tigo Paraguay. He had previously worked with Tigo Rwanda and Tigo Chad. The new chief commercial officer, Diego Javier Pacheco is also from Tigo. Before he joined Airtel Uganda, he was chief commercial officer for Tigo Tanzania. He also previously worked at Tigo DRC.

The company recently hired the services of consultant, one Juan, whose job is to help ‘fix’ the telecom’s sales and distribution. Juan is a former employee of Tigo DRC. Reliable sources tell Newz Post that this man may soon or later land himself a full time job at Airtel. “What is happening is just buying time as management looks where to place the consultant”, said a source. This magazine has also learnt that the Head of Airtel Money is also moving on. Two former Tigo employees are being warmed up for the top job. Airtel’s head of sales is leaving and expected to join the market leaders, MTN late-February 2015.

The bad news is the changes are not enabling skills transfer. Three Ugandans lost their seats on the central executive and were all replaced by foreigners. The EC is composed of ten members and it is Airtel’s highest decision making. That is no good for succession planning and nurturing of local talent for growth.
These sweeping changes at top leadership present challenge for Airtel to keep their net gain against MTN as they had tried in the first quarter of 2014.

Uganda’s telecom market presents new dynamics which gives a long learning curve for new executives. It usually takes a new team some time to comprehend the market. They will attempt new models and interventions which may or may not work. It is always a gamble.

A few years ago, the once mighty UTL had great innovations like 3G but very poor execution and marketing by newly recruited marketing manager from non-Anglophone country totally failed it. UTL failed to optimize their advantage as first company to introduce 3G. A year later, MTN invested in the technology and took the market thanks to their lethal focused marketing that resonates well with the local people.

Changes at Airtel come at a time where the Orange Uganda brand is slowly disappearing attributed to the acquisition of the company by Africell. At UTL, Vodafone seems to be having private talks. Taken together, these changes in the market provide MTN with an opportunity to widen the gap further.

Lots of reorganization work seems to be going on at Airtel. For example, a recent clean-up is reported to have revealed some subscribers initially reported by Warid did not exist. It is believed that in order to boost their numbers, Warid exaggerated her number of subscribers by about 500,000. These phony sim-cards [subscribers] were then pre-registered on Waridpesa. Don’t miss more of this in our March 2015 issue.

“MTN is swift in her change management processes. At the moment we [MTN] are working hard on delivering value to our customers. Great products have been implemented in last 10 weeks. More to come!” said MTN CEO Brian Gouldie, in a tweet to Newz Post staff.

Mr. Gouldie explained that MTN has substantial investment plan for 2015 so as to deliver on the value, quality and reliability promise in their strategy.

The new found love for Tigo employees by Airtel Uganda has left analysts wondering: is Airtel adopting the #Tigo business model? Is Tigo about considering a management takeover Airtel Uganda or the two are just forging partnership with Airtel Uganda? These questions will surely soon be answered.
Some small gains by Tigo over MTN and notable achievements of the company in the region could be a deliberate strategy by the Airtel owners to establish a formidable force in Uganda. They want to face MTN head on after thorough preparations.

In Rwanda, Tigo recently overtook MTN to become the market leader thanks to the leadership of former director for Tigo-Cash who was promoted to head the company. In Tanzania, Tigo is a brawny number two, with strong presence in Dar el Salaam. In Democratic Republic of Congo (DRC), Tigo is number three after Airtel and #Vodacom.

At strategic level, unlike Tigo telecom, Airtel is a numbers company. They are aggressive in the market – in terms of advertising and promotions – and want to see the numbers go up.

On the contrary, Tigo is consumer driven. They seek to first find answers from consumers: what are consumers saying? What exactly do they need? If the majority wants a given product or service, they will go extra miles to ensure they offer it.

Tigo also uses below the line marketing strategies. They believe in ground foot soldiers or promoters for effective airtime retail. They focus on enabling buyer convenience. With majority Ugandans not so educated, foot soldiers model is appreciated. It enables direct interaction with customers and an opportunity to explain the products and services face to face.

Tigo focuses on offering customer centric services using appropriate channels and cutting costs. Today, Airtel is said to be spending about US $40 million annually to promote sales but instead it is killing it. If well implemented, the Tigo model could help cut down this budget by half and attain the same results. For long, MTN’s high airtime sales are attributed to the convenience by which customers buy it. You have seen several foot soldiers on the streets.

Most of these people retail MTN airtime because it is fast moving compared to the competitors. As a result, people prefer to carry only MTN airtime as it offers most return. Add to this MTN’s deliberate efforts to ensure exclusivity, other telecoms have found it tough when it comes to distribution. Airtel, using the Tigo model, is said to be planning to recruit a special team to sell their airtime on the streets. This team will wear properly branded t-shirts for easy identification.

Just like most telecoms, Airtel strategy and philosophy are dictated from the group level. So the Airtel Uganda MD may find himself diametrically opposed with orders from above. For example, many of promotions Airtel Africa including Airtel Uganda carries out come from the group. Take a case of Mr. Money and the current promotion Airtel Trace star. Some of these ads carry messages that are completely detached from the local public they are trying to market to.

Lots of money spent on television ad, less impact in the minds of the target market created. Warid’s success was attributed to their ability to craft unique marketing messages for Uganda. They had no group to interfere with ‘group strategy.” They responded to the market dynamics in record time. No wonder MTN Uganda got the green light to do it their way in order to respond to calm the market. When Airtel bought Warid, they seem to have not carefully analyzed factors that made the company tick.

At Airtel, the recent developments point to one thing: operational and strategy mismatch. At tactical and operational levels, the local Airtel management may find they are running the company Tigo way, yet at strategic level, they have a different model. This is a huge gamble.

If the Tigo model brings in more revenue and increase the subscriber base, they might keep it. However, the danger will come if the changes fall short of revenue and subscriber expectations which are badly needed.

What will happen then? Your guess is as good as ours.