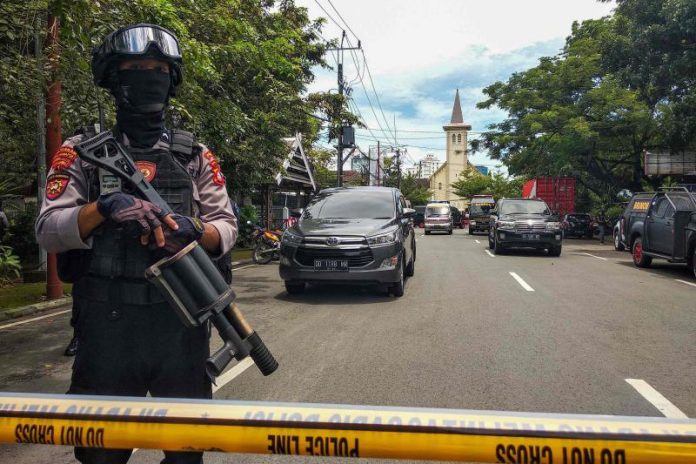 An Indonesian cathedral was rocked by a suicide bombing Sunday that wounded 20 as worshippers celebrated the start of Holy Week.
Two suspects behind the powerful blast were killed as they rode a motorbike into the compound of the church in Makassar city on Sulawesi island, authorities said.
“A suicide bombing occurred at the cathedral in Makassar,” Indonesia’s chief security minister Mahfud MD told reporters in the capital Jakarta.


Twenty church officials, congregants and security staff were injured by debris from the blast, authorities said. Forensic investigators have been poring over body parts scattered at the scene in a bid to determine the attackers’ identities.
The two suspected bombers both died, according to Indonesian police, and so far no other deaths have been reported.

A security guard who tried to stop two suspected bombers from entering the churchyard is among the injured, Indonesian Police Inspector General Argo Yuwono told media.


The suspects used a motorbike and detonated outside the church which was holding Easter Holy Week services when they were stopped from entering the yard.

There has been no immediate claim of responsibility for the attack. Police say the investigation with the anti-terror unit is ongoing.

Indonesian president Joko Widodo strongly condemned the attack in a video broadcast, describing the attack as as an “act of terrorism,” Reuters reported.


In his mass for Palm Sunday, Pope Francis said he prayed for all the victims of violence, “especially those of this morning’s attack in Indonesia, in front of the Cathedral of Makassar”.