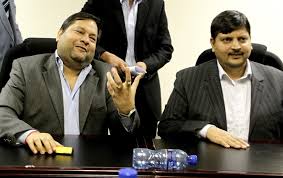 It has been the question gripping South Africans for the last week: are the Gupta brothers citizens of their country, or not?
The South African government certainly seemed confused about the status of the wealthy Indian-born family – who have been accused of having used their relationship with former president Jacob Zuma to wield political power and help their business interests, accusations they deny.


Eventually, after going back and forth on the issue, it settled on two out of three of the brothers holding South African citizenship, with just Ajay – currently wanted by police – not having taken up citizenship.
Unfortunately, it doesn’t appear that is quite the end of the matter.

It has now emerged the Indian government has also looked into the issue – and has told the world in no uncertain terms that the Gupta brothers were all South African citizens.
Ministry of External Affairs spokesman Shri Raveesh Kumar has been quoted as saying: “I think it is important to understand the background of the Guptas themselves.


“The Guptas is a privately owned South African business. They and their family members are South African citizens, the government and the law enforcement agencies of South Africa are doing their job.
“The law must and, I think, will take its own course, it should prevail.”


He added the government of India would not involve itself in the matters of other countries.
It is not exaggeration to say that the revelation – brought to light by national broadcaster SABC – has been met with a fair amount of eye-rolling in South Africa.