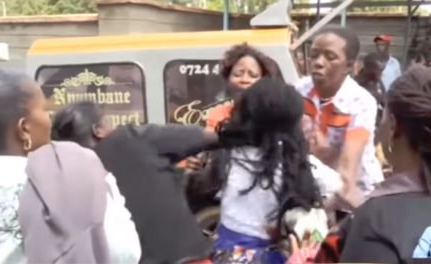 There was drama at Hospital Mortuary on Wednesday after four women showed up to claim the body a man who was killed in a road accident.


All the women claimed to have sired a son for the deceased, though none lived with him as a wife.
Police were forced to intervene after the women broke into a fight after failing to agree on who was to get the burial permit for the deceased.


According to Citizen TV, the four women claimed to be the wife of 32 year-old Peter Mwangi Gichobi, a boda boda operator who died on April 28 in a road crash on the Nyangati-Embu road.
The four allowed the deceased’s uncle, Stanley Ngigi, to bury him at his home in Ngomongo Village in Kirinyaga Central sub-County.

This was after the deceased’s family promised the four women that they will be included in sharing of his wealth.
The unfortunate incident happened at Kerogoya Referraal hospital in Kenya.
//Nairobi News.