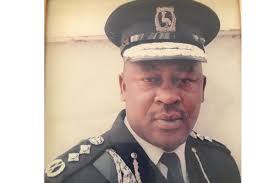 The police are mourning passing away of former Inspector General of Police John Kisembo, which occurred on Thursday afternoon at platinum hospital, Kampala.


The deceased is said to have been battling an illness for months
The police’s Chief Political Commissar Asan Kasingye confirmed his death on his social media accounts.
“I am sad and blue about my former boss and friend. Rest thee well IGP (Emeritus), John Kisembo,” AIGP Kasingye tweeted.

The late was IGP from the year 1999 to 2001, and we will never forget the excellent leadership he gave to the Uganda Police Force during the many years he served. At the time of his death, he was working with United Nations Institute for the Prevention of Crime and Treatment of Offenders


According to Fred Enanga, the PRO Uganda Police Force, The IGP has reached out to the family of the deceased, and extended his prayers and thoughts to them during this time of sadness.


‘ ‘The IGP has further tasked the Director Welfare and Production to work with the family to ensure he is honoured in a way befitting his life and position in the UPF.’’ Enanga added.
Kisembo was appointed IGP on January 3, 1999 and retired on April 11, 2001. He was replaced by Gen Katumba Wamala