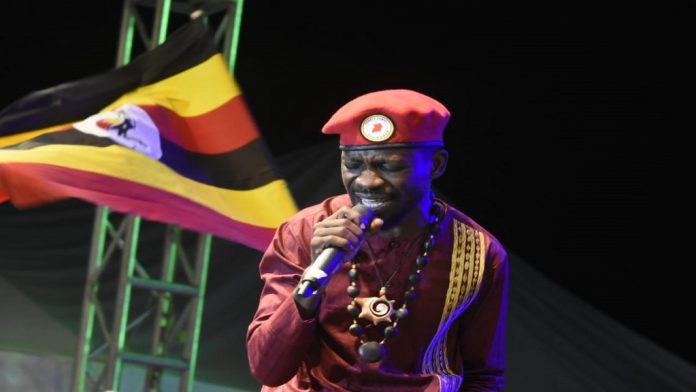 Bobi Wine says he was ‘‘immensely humbled by the opportunity to represent Uganda and Africa at the just concluded #RebelSalute2019 in Jamaica.
‘‘It was an honor to meet and interact with the legends of reggae music for generations. Most of the music on that stage was conscious music. I feel reenergized by the sounds of freedom that reverberated from the show to the world’’
Bobi Wine was never overawed by the occasion, and performed with a confidence that went over well with the audience at Rebel Salute 2019, at the Grizzly’s Plantation Cove in St Ann, Jamaica.


Along with members of his entourage, Bobi Wine was adorned in a red beret and all the time appeared in a militant mood.
During his performance, he took time out to lash out against a regime in his homeland that he claimed was oppressing the people of Uganda. He claimed he was being framed by the government who he said arrested him after planting two high-powered assault rifles in a hotel room he occupied.

“After being poor, and by 22 owning beach front property, I thought I had achieved something. But when I looked back and saw all of my childhood friends living in poverty, I realised that wasn’t all,” Bobi said. “I realised I had to use my music to uplift the people. As a child growing up, I watched videos of Sting, (Reggae) Sunsplash and most importantly Rebel Salute. Those videos inspired me to use my music to uplift my people.”


After humming the melody to the Punany rhythm, the chanter stopped midway his delivery and he praised the music of Jamaica for opening his eyes and mind, and those of a wide cross section of Africans who looked to the Caribbean island’s music for inspiration.- loopjamaica reported.
“It is your music that opened many eyes. Keep your eyes and minds on Africa,” he said.


He explained how he got his stage name, Bobi Wine, after being teased by Rebel Salute Master of Ceremonies Mutabaruka. “In school, they called me “Bobi” and then they started calling me “Wine” because, as I got older, I got better,” he said.