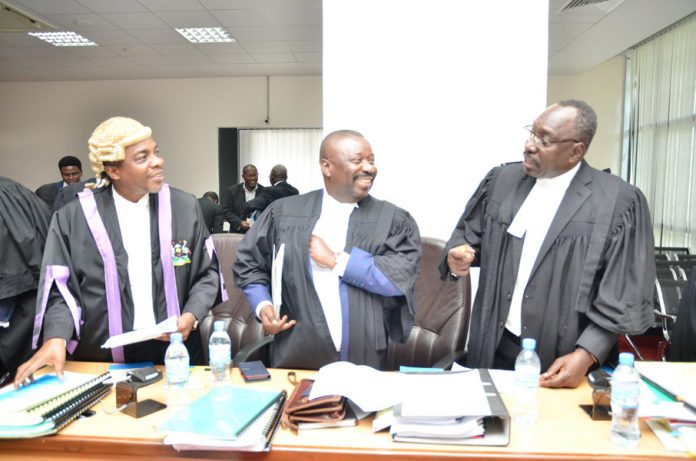 The Attorney General (AG), William Byaruhanga, has appealed to Parliament to prioritize recruitment of staff at the Ministry of Justice and Constitutional Affairs.

The AG argued that low staffing is to blame for the accumulation of court awards against government.

Byaruhanga told the House Committee on Legal and Parliamentary Affairs that the Ministry is only 60 percent staffed, leading to cases where state attorneys miss court or have to constantly ask for adjournments.

“This eventually leads to a judge ruling against government in cases where government has been sued,” Byaruhanga said while presenting the Budget Framework Paper for the Ministry of Justice and Constitutional Affairs before the committee on 16 January 2020.


“Unlike other ministries, low staffing has a direct bearing on the state funds. Outstanding court awards now stands at shs545bn,” he said.
The Chairperson of the Committee, Marksons Jacob Oboth, expressed willingness of the committee to support the Ministry to address the funding gap in recruitment of more staff.


“The Attorney General should bring us the budget required to recruit more staff so that we can use it justify your request,” he said.

Hon. Edward Makmott Otto, Agago County MP said that staff recruitment should be a priority for the Ministry of Justice, saying that under-staffing and inadequate salary for existing staff has for long affected the performance of the ministry.


“When I look at Agago Grade One Magistrate’s Court, it is serving all the neighboring districts and yet the Magistrate is paid peanuts. This is the issue we have to look at and help the Ministry to negotiate [with the Ministry of Finance],” Makmot said.

Hon. Robinah Rwakoojo Gureme (NRM, Gomba West) warned that if low staffing and under payment of the staff is not addressed, the Attorney General’s Chambers will end up serving as a training ground for lawyers.


“It is very unfair and yet the Attorney General’s chambers has the best lawyers but they do not last for long because they are under paid and over worked,” she said.

Meanwhile, the Attorney General also highlighted the pending compensation for war claimants in the Northern, Eastern and West Nile Regions as a recurrent challenge which has affected the performance of the ministry.


He said that the Ministry requires Shs10billion to carry out the verification exercise before the compensation is rolled out.

Byaruhanga however advised government to source for compensation funds from development partners, saying that the budget required is huge.