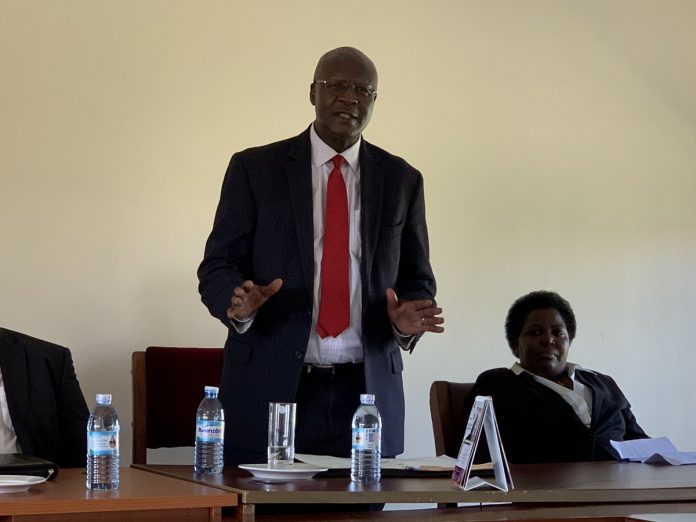 
The Chief Justice, revealed that they were visiting northern Uganda districts, including Amuru because ‘‘these districts have special circumstances arising out of the war. We’re on a fact-finding mission so we can plan better for you’’
In Nwoya, court users told the Chief Justice that ‘‘Our Magistrate at Nyoya-Susan Anyeko is committed to her work, has a good working relationship with the district leadership, and conducts locus visits in land cases.Our main issue is that the nearest prison is away in Gulu’’ – Patrick Okello Oryema, district chairman said.

‘‘It pleases me to come to an area and the residents tell me that they are happy with the services offered by the magistrate there. I like to thank the Amuru Magistrate Grade One (Susan Anyeko) for upholding the trust and confidence in the Judiciary ‘’ Chief Justice Bart Katureebe said.
On his part, caretaker Chief Magistrate, Dawa Mateng said ‘ ‘One of the biggest challenges for Nwoya Chief Magistrates Court is that witnesses do not turn up for cases due to long distances. Many cases end up collapsing due to absence of witnesses/evidence’’


Uganda’s Judiciary is constantly accused of being one of the most corrupt institutions in the country. JII carried out a study between 2015 and 2016 to identify: The most prevalent patterns in which corruption manifests in judiciaries;
According to results on selected indicators of corruption from Judicial Integrity study for 31 countries, Uganda is the only country where four forms of corruption (bribery, undue influence, extortion and misuse of funds were perceived to be very high


However, the study revealed the media is sometimes perceived as exaggerating information on the prevalence of corruption within the judiciary or even as influencing public opinion in ongoing trials in a biased way.

Amuru and Nwoya districts have made my day today. For once, the court users have been praising our judicial officers. Elsewhere I’ve been, people have been complaining of corruption, late coming and all sorts of issues, says Chief Justice Bart Katureebe. pic.twitter.com/aNKaiyNOt9